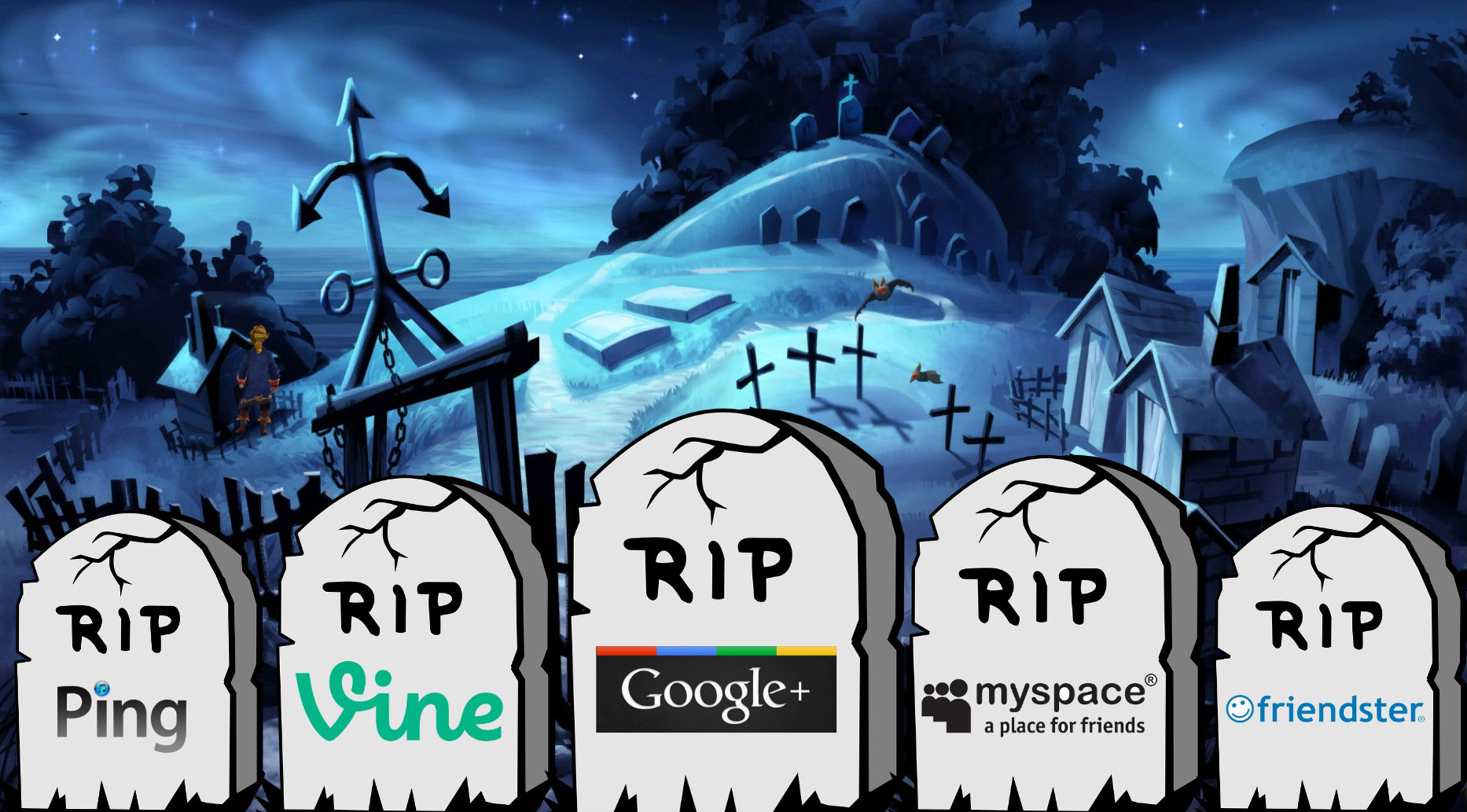 In 1997, the first social networking site was launched, SixDegrees.com. At its peak, the site had around 3.5 million registered users. The platform was simple; users could send messages and share content by posting on bulletin boards. The network shut down just four years later in 2001.

Obviously, social media has come a long way since then, and we’ve seen many social media platforms launch, experience relative success (or complete failure), then crash and burn a few short years later.

Remember Orkut? No, not the pest control giant, Orkin. Orkut was launched in 2004 by Turkish software engineer and Google employee, Orkut Büyükkökten. This site had a much longer tenure than SixDegrees, but still ended up in the grave in 2014.

What about these sites led them to their demise? What are the characteristics of a successful social media network? Let’s explore some of the social platforms of days past:

Nicknamed the “grandfather of social networking sites”, Friendster launched in 2003, and acquired more than 2 million users within the year. Members could share photos, videos, messages, and comments with their friends. It really was the first social network similar to Facebook, Twitter and other platforms that have become so popular today.

After the introduction of MySpace, Facebook, and Twitter, Friendster began to fall off the map. The site relaunched in 2011 as a social gaming platform that focused on users from mainly Asian countries. Finally, in 2015, Friendster suspended their services, citing “the evolving landscape in our challenging industry” and a lack of engagement from their community.

From 2005 to 2008, MySpace was the largest social networking platform in the world, even surpassing Google as the most visited website in June 2006. MySpace built off the success of Friendster, offering personal profiles, blogs, groups, photos, music, video, and more.

Unfortunately for MySpace, Facebook overtook the site in 2008. After years of decline, the site was purchased by Specific Media Group and Justin Timberlake, hoping to take advantage of MySpace’s influence on the music scene. Ever since then, the site has continued its steady decline into irrelevance, clinging to music as a last lifeline.

Adieu, MySpace. Good luck on your journey as a music-sharing platform.

While technically not yet dead, Google+ definitely did not accomplish what it set out to: compete with Facebook. Launched back in 2011, it’s arguable that Google+ only exists at all in its current state because signing up for a Google account offers so many other benefits: Google Drive, Google Hangouts, Gmail, and the rest of Google’s applications.

So long, Google+. You’re still here, but you’re the person standing alone in the corner at the party.

iTunes what? This short-lived, obscure network launched in 2010 and closed its doors soon after in 2012. Steve Jobs described iTunes Ping as “sort of like Facebook and Twitter meet iTunes.” On Ping, users could follow their favorite artists and friends, and see short posts from each.

Auf Wiedersehen, iTunes Ping. It was fun (sort of) while it lasted.

Vine had a short, but glorious existence. Launched and purchased by Twitter in 2012, Vine was a platform made for sharing quick, six-second looping video clips. The service exploded in use, becoming the most-downloaded free application in the iOS App Store in 2013. In 2016, Twitter announced it would disable Vine’s uploads, but continue to allow viewing of the looped videos.

While the app was available, Vine was an enormous hub of creativity. Millions of short videos were uploaded, featuring comedy, music, stop motion, and animation. Some Vine stars have even garnered enough fame to land roles in television commercials, one even has his own documentary series on Netflix.

Vine, you will be dearly missed. Twitter made a mistake when they shut you down.

So, what about these social networks led them to failure?

Why Do Social Media Platforms Fail?

Facebook, the most popular social network on Earth, has over 2 billion users. If Facebook were a country, it would be the most populous in the world. For perspective, there are 1.3 billion people in China. This network shows no sign of slowing down, it seems the only limit left to its growth is the number of people on Earth who have access to the internet – something they are actively working on increasing.

So, why has Facebook succeeded where others have failed? What does Facebook have that MySpace and Friendster did not? For starters, Facebook maintained its scale as waves of users signed on and created accounts.

One aspect of Friendster’s downfall was that it was unable to keep up with how many members joined the site. As more people joined, the site grew slower and slower, so slow that people were forced to switch to Facebook or MySpace.

MySpace failed because it connected users to bands, celebrities, and strangers, rather than people you knew in your real life. People wanted to interact with their friends and family to enhance and expand their existing social lives onto the internet.

iTunes Ping fell apart and Google+ remains stagnant because their services were/are redundant. Users already had Facebook to accomplish anything that Ping and Google+ offered.

1. Successful social networks are original. New networks will not survive if they simply copy the concept of an existing service. They must build upon the services by fulfilling a need of the users, or introduce something entirely new that users did not even know they wanted.

2. Successful networks scale. As social networks grow, they must be able to accommodate influxes of new users. When platforms start to slow down and falter due to increased use, people will leave due to frustration.

3. Successful social networks evolve. As user bases grow, so do the wants and needs of those users. When platforms fail to address the feedback of their members, they provide an opportunity for another platform to step in and fulfill that need.

The Future of Social Networking

With the demise of Twitter and SnapChat looming on the distant horizon, the future of social media is up in the air. Facebook and Instagram will continue to dominate the market, but neither service offers everything that a citizen of the social realm looks for.

Facebook is great for news articles, updates from friends, and memes, but the enormous amount of content is overwhelming, and ads take up a lot of space in Newsfeeds.

Instagram is the perfect medium for sharing photo and video, but is an awful place to post a quick text update to your friends.

Where do you think social media is headed? Contact Frozen Fire today to continue the conversation.

Ad Blocker, Digital Ads & the Future of the Internet

How to Create Viral Video, Game of Thrones & The VMAs